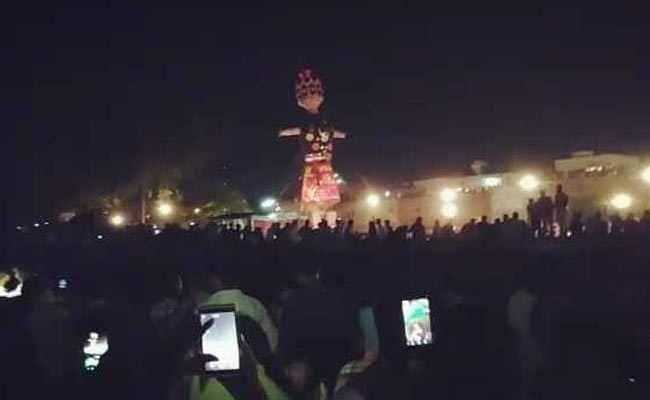 Amritsar train accident: Here’s all you need to know

Dussehra celebration! Revelers cheering as Ravana’s effigy, was set aflame. Some even captured the episode on their mobile cameras. None could have imagined the tragedy that was about to unfold. At least 61 people were killed and 72 injured on Friday evening after a crowd of Dussehra revelers that had spilled onto the railway tracks while watching the burning of Ravana effigy was run over by a train.

The train was coming from Jalandhar when the accident occurred at Joda Phatak near Amritsar, where at least 500-600 people were watching ‘Ravana Dahan’ at a ground adjacent to the tracks.

It took just about 10-15 seconds for the train to pass, and leave behind a heap of crushed and dismembered bodies. The train mowed down and blew away anyone who was standing across the tracks as the effigy of Ravana went up in smoke. A state mourning was declared

Sub Divisional Magistrate Rajesh Sharma said 61 people, including women and children, have died and at least 72 injured have been admitted to Amritsar hospital.
The local passenger train, 74943 DMU, was coming from Pathankot. The CPRO (Northern) said, “As per initial information, the incident took place at gate number 27 between Amritsar and Manawala. As Dusshera celebrations and Raavan Dahan was taking place, some incident had occurred and people started rushing towards closed gate number 27 while the DMU train number 74943 was passing the closed gate. Further information is being collected.”

“There are more than 50 casualties. The injured have been rushed to the hospital and passengers are being evacuated,” police said after the accident.

Anger and sorrow filled the air as people ran to look for their near and dear ones. “I have lost my child. I want him back,” said an inconsolable woman.

People shouted slogans against local MLA and wife of Punjab minister Navjot Singh Sidhu, Navjot Kaur Sidhu, who was present as chief guest during the event, alleging she left the venue after the accident. She, however, said she had left the place before the accident took place and rushed to the hospital the moment she came to know of it.

She said the railways should have ensured that trains slow down near that section of the track during Dussehra celebrations.

“Every year, Dussehra celebrations take place there,” she said, as opposition parties raised questions about permission for holding the programme near the railway tracks.

Amid the political bickering, all major parties, including the BJP, Congress, and AAP, also asked their local party workers to help in relief work.

Singh tweeted, “Shocked to hear of the tragic rail accident in Amritsar. Have asked all government and private hospitals to stay open to help in this hour of grief.  Singh set up a Crisis Management Group to monitor the relief and rehabilitation efforts in the wake of the accident.

Prime Minister Narendra Modi on Friday mourned the death of several people in a train tragedy.

“Extremely saddened by the train accident in Amritsar. The tragedy is heart-wrenching. My deepest condolences to the families of those who lost their loved ones and I pray that the injured recover quickly,” he tweeted. Modi announced Rs 200,000 compensation for the family of the dead and Rs 50,000 for the injured. He also directed officials to provide immediate assistance.

Union Home Minister Rajnath Singh announced all possible assistance by the Centre to Punjab after the train accident.

“Pained beyond words at the loss of precious lives due to a train tragedy during Dussehra festivities in Punjab. My thoughts are with the families of the deceased and prayers with the injured,” he tweeted.

The Home Minister said he had spoken to the Home Secretary and DGP of Punjab regarding the accident and they were rushing to the spot.

Railways on Friday rushed its top officials to Amritsar, while Railway Minister Piyush Goyal, who had gone to the US, canceled all his engagements there and is returning.

“Shocked and deeply saddened by the tragic train incident that occurred in Amritsar. My heartfelt condolences to the families of the victims. I pray for the injured to recover quickly. Railways are conducting immediate relief and rescue operations,” Goyal tweeted from the US where he had gone to attend an event.

It would be wrong to say that Railways is responsible for this accident. It is the main line. There is no speed restriction there. People were watching Dussehra celebrations from railway tracks. People need to be more alert; they must not trespass on railway tracks.

Minister of State (MoS) for Railways Manoj Sinha, who visited the accident site, assured that the Railways is providing all assistance needed.

“But the time right now is for every agency from the state and the central governments, the railways, Zila authorities, etc, to come together to help the injured, provide them medical care, relief. I just spoke with the Minister of State for Railways, Manoj Sinha, he said he will reach there, along with other officials and ministers from the Central government.

Former Chief Minister Parkash Singh Badal demanded an inquiry by a sitting high court judge to fix the responsibility and punish the guilty.

His son and senior party leader Sukhbir Singh Badal said he was extremely sad to hear the unfortunate incident. “The authorities concerned must be held accountable for the ill-fated accident & strict action must be taken against the guilty police officers and organizers,” he said.

Aam Aadmi Party too held the Punjab government responsible for the accident. AAP MLA Harpal Singh Cheema and its MP Bhagwant Maan expressed deep condolences over the deaths but blamed the district administration for the deaths as it allowed people to burn effigies close to railway tracks.

The AAP leaders demanded a judicial probe into the incident and punishment for the guilty. They also demanded a compensation of Rs 10 bn and a government job to one family member of those dead. 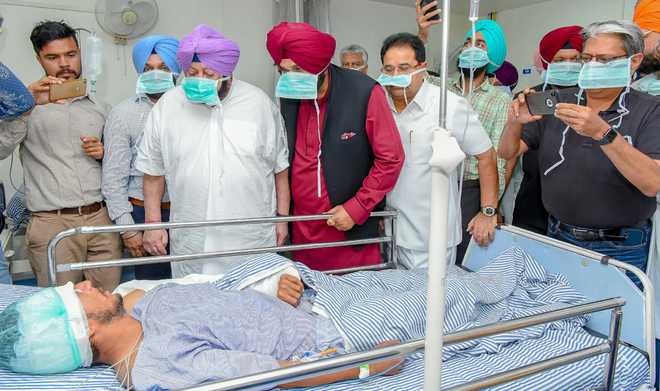 Navjot Singh Sidhu arrived at the hospital today morning accompanied by hordes of security personnel and officials. Sidhu refused to talk to the media.

The Punjab and Railway Police on Saturday questioned the driver of the train that crashed at least 60 people. Police sources said that the organizers of the event had gone underground. Railway officials is gathering information from the railway linemen posted along the tracks near the Jora Phatak area, who failed to inform the DMU driver regarding the presence of over 700 people on the railway tracks.