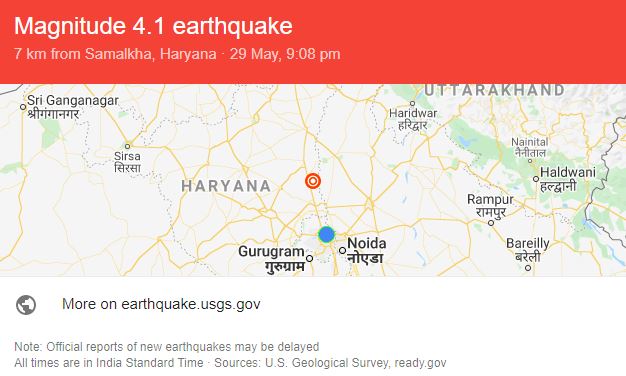 New Delhi: Tremors were felt across Delhi and in the nearby regions of Noida and Gurugram as well on Friday late evening after two earthquakes hit Rohtak in Haryana in a span of an hour. There were no immediate reports of casualties or loss of property.

The first one of a medium intensity one of magnitude 4.6 had an epicentre in Rohtak in Haryana, said National Centre for Seismology. According to the NCS, the quake occurred at a depth of 5 km at 9.08 pm.

A second quake occurred within a span of one hour and was of lower intensity of magnitude 2.9 and occurred at the same location at 10 pm, the NCS said. Rohtak is situated nearly 60 km from Delhi.

Earthquakes of less than five magnitudes are unlikely to cause large-scale damage, unless in case of weak or compromised structures. Delhi lies on Zone IV of the seismic map of India. Zones IV and V have a high probability of destruction.

This is the third time tremors have been felt in Delhi-NCR in the month of May and the fifth time in the last two months.

People took to Twitter to claim that it’s the proverbial end for India what with the country already grappling with locust swarms, coronavirus, cyclone. In no time, #earthquake became the top Twitter trend in India.