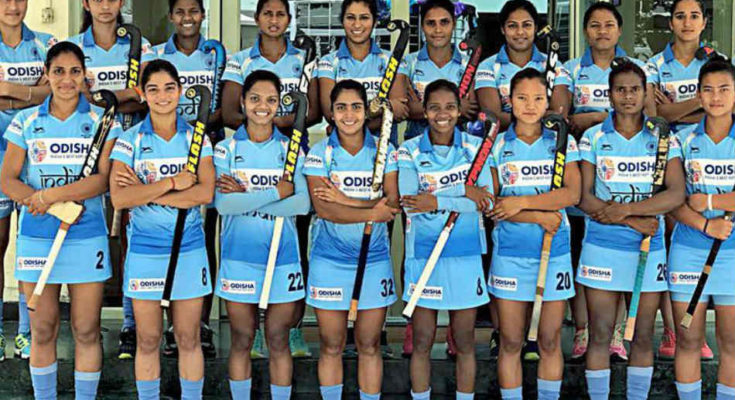 Defending Champions India got off to a rollicking start as they beat World No.12 Japan 4-1 in their opening match at the 5th Women’s Asian Champions Trophy here at the Sunrise Stadium on Sunday. It was young forward Navneet Kaur who starred in India’s win with a hat-trick of goals scored in the 7th, 25th and 55th minute while Anupa Barla (53’) was the other goal-scorer for India

India were dominant right from the start as they displayed well-strategized attack to break the a strong Japanese defence. An early chance came by when forward Vandana Katariya and Lilima Minz worked in tandem to create space in the striking circle. It was Navneet Kaur who picked up an assist from Vandana to send the ball past Korean goalkeeper fetching India 1-0 lead in the 7th minute. India played with speed, kept the ball possession and stayed consistent as they kept up the pressure on Japan. Good defence led by Skipper Sunita Lakra ensured Japan didn’t find too many chances in the circle. Meanwhile, Navneet Kaur showcased her abilities with the stick as she drove into the 25-yard mark and assisted experienced forward Vandana drive into the circle. Vandana’s clever return of ball from the right flank to an unmarked Navneet at the top of the circle saw her score a splendid goal doubling India’s lead to 2-0 in the 25th minute.

India continued to keep up the momentum into the third quarter which was disrupted by rain. Three minutes into the third quarter, India won back-to-back PCs but both Deep Grace Ekka and Gurjit Kaur could not convert. Japan too won three back-to-back PCs this quarter but couldn’t beat the experienced India goalkeeper Savita.  India’s third goal came off a brilliant assist by Udita to Anupa Barla who was impeccable in her effort to pick up the ball, beat the Korean defender to send the ball into the net with a fierce hit in the 53rd minute. India’s fourth goal came off a counter attack when Japan missed their opportunity to score off a PC in the 55th minute. It was Navneet who was the cynosure of action yet again taking the ball into India’s half, passed it to Udita until she could position herself to strike the ball past Korean goalkeeper with ease. Her significant effort in India’s win saw her being awarded the man-of-the match. Though in the 58th minute Aki Yamada scored a consolation goal for Japan, it did little damage to India’s feat.

“It was an important match to win because a good start always gives the confidence to play better in the next matches to come. This is my first man-of-the-match award in an international arena, and I am very happy about it. In the absence of our key striker Rani, there was more responsibility on us to create chances and I am happy that our team did really well. Our target is to win this tournament so that we can carry the winning spirit into the Women’s World Cup,” stated an elated Navneet Kaur after the match.