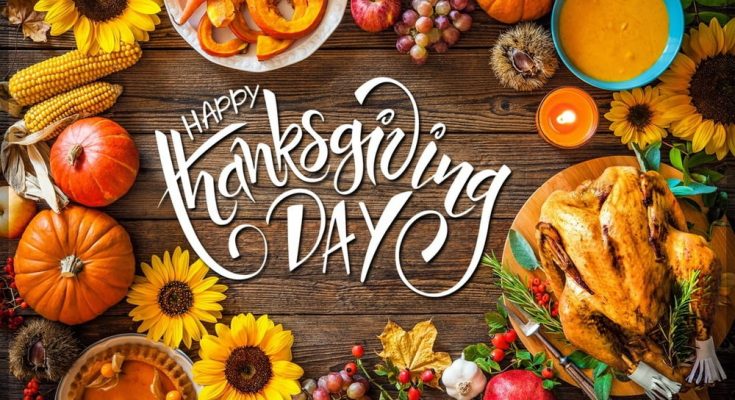 Thanksgiving is America’s most beloved annual holiday and takes place on the fourth Thursday of November, kicking off the so-called Holiday Season. The origins of Thanksgiving date back to 1621 when a group of English pilgrims in present-day Massachusetts shared a feast with a tribe of Native Americans to celebrate a plentiful harvest.

This “First Thanksgiving” took place in October and lasted about three days, although there is also evidence to suggest similar ceremonies were held two years earlier in Virginia. It is then decided, Thanksgiving will be celebrated on the fourth Thursday in November. The holiday continues to be a day for Americans to gather for a day of feasting, football and family.

The Thanksgiving meal includes seasonal dishes such as roast turkey with stuffing, cranberry sauce, mashed potatoes and pumpkin pie. The holiday feast dates back to November 1621, when the newly arrived Pilgrims and the Wampanoag Indians gathered at Plymouth for an autumn harvest celebration, an event regarded as America’s “first Thanksgiving.” Here’s how they cook the meal:

Wild—but not domestic—turkey was indeed plentiful in the region and a common food source for both English settlers and Native Americans. But it is just as likely that the fowling party returned with other birds we know the colonists regularly consumed, such as ducks, geese and swans.

Turkey or no turkey, the first Thanksgiving’s attendees almost certainly got their fill of meat.

Fruits indigenous to the region included blueberries, plums, grapes, gooseberries, raspberries and, of course cranberries, which Native Americans ate and used as a natural dye.

Thanksgiving meal consisted of seafood, which is often absent from today’s menus. Lobster, bass, clams and oysters might also have been part of the feast.

Whether mashed or roasted, white or sweet, potatoes had no place at the first Thanksgiving. After encountering it in its native South America, the Spanish began introducing the potato to Europeans around 1570.

The English settlers in North America improvised by hollowing out pumpkins, filling the shells with milk, honey and spices to make a custard, then roasting the gourds whole in hot ashes.

The Thanksgiving celebration has lost much of its original religious significance; instead, it now centers on cooking and sharing a bountiful meal with family and friends. Turkey, a Thanksgiving staple so ubiquitous it has become all but synonymous with the holiday. Today, 90 percent of Americans eat the bird—whether roasted, baked or deep-fried—on Thanksgiving, according to the National Turkey Federation. Other traditional foods include stuffing, mashed potatoes, cranberry sauce and pumpkin pie.

Parades have also become an integral part of the holiday in cities and towns across the United States. It typically features marching bands, performers, elaborate floats conveying various celebrities and giant balloons shaped like cartoon characters.