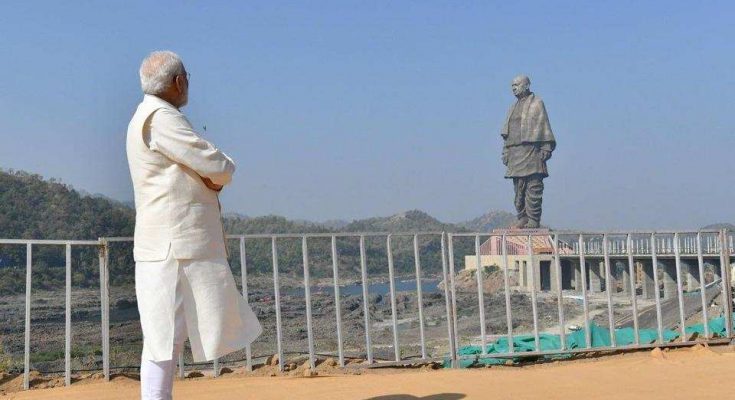 Prime Minister Narendra Modi unveiled a 182m-tall statue of Sardar Vallabhbhai Patel, the Statue of Unity at Kevadiya in Narmada district on the 143rd birth anniversary of India’s first home minister. Foundation was laid by Modi in 2013 as chief minister of Gujarat, is bigger than the current tallest statue, the Spring Temple Buddha in China (128m), and will be almost double the height of the Statue of Liberty in New York. But the Statue of Unity will lose its place to the Chhatrapati Shivaji Maharaj Memorial, a 192m statue under construction in the Arabian sea off the Mumbai coast when work is expected to finish in three years.

Modi leads the puja ceremony with water brought in Kalash (metal pots) from 30 holy rivers, including the Ganga, Yamuna, and Brahmaputra among others. Apart from governor OP Kohli, others present at the inauguration will be Bharatiya Janata Party (BJP) president Amit Shah, Karnataka governor Vajubhai Vala and Madhya Pradesh governor Anandiben Patel.

Fly-past by the Indian Air Force and music by the ceremonial bands of the army, navy and air force was the part of the unveiling ceremony. “The statue is a tribute in a real sense as here the research on agriculture and tribal development will take place. These were the subjects close to Sardar Saab. Statue will open the floodgates of tourism in this tribal belt, bringing income to locals.

Cultural groups from 29 Indian states performed as soon as the PM arrived at the statue venue on Sadhu Bet. The Statue is the latest in a series of attempts by the BJP to lay claim to the legacy of Patel, who was a lifelong member of the Congress, at a time when a section of the Patidar community has grown increasingly disgruntled with the BJP.

The support of the influential Patidar community, which constitutes 12% of the state’s population, is crucial for the BJP to repeat its 2014 record of winning all 26 Lok Sabha seats in the state. Even over the OBC quota issue, Patidars are divided and a large section is not adamant over the demand of reservation.

Controversy – The part of the event

Scores of tribal groups from nine districts have called for a strike and as many as 11 Congress tribal MLAs and independent MLA Jignesh Mewani have supported the call. Patels and tribals are unhappy due to the drama surrounding the statue’s inauguration.