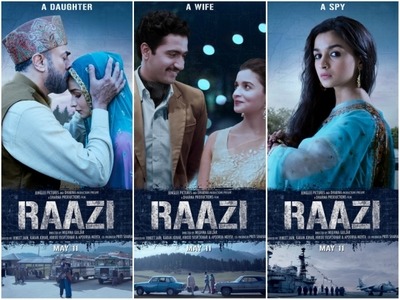 Raazi Story: Set against the backdrop of the Indo-Pak war in 1971, an Indian girl marries a Pakistani Army officer to spy for her country.

Raazi Review: ‘Raazi’ is the true story of a Muslim girl Sehmat (Alia Bhatt) – a naïve and inexperienced Kashmiri whose life changes when her father Hidayat Khan (Rajit Kapoor) seals her fate as an Indian spy. She undergoes rigorous training under Indian intelligence agent Khalid Mir (Jaideep Ahlawat) before being married off to Pakistani Army officer Iqbal Syed. On the other side of the border, Sehmat gradually assimilates into Iqbal’s family to uncover vital information while keeping her real motives hidden from them.

Vicky Kaushal’s nuanced turn gives Iqbal a charming sincerity as he tries to balance his attention between Sehmat’s natural appeal, and the love for his country. Iqbal’s father, played by Shishir Sharma, lends a commanding presence to Brigadier Syed as a man committed to his official duties over his family. Back home, Rajit Kapoor makes his mark as Hidayat who reluctantly chooses his daughter’s destiny, placing the devotion of his country above all else. Of course, there’s an undeniable delight in seeing Soni Razdan play mother to her real-life daughter onscreen. Arguably, the film’s most substantial relationship is between Khalid and Sehmat. Jaideep Ahlawat tactfully plays Khalid as a stoic patriot who deliberately restrains his concern for Sehmat. They share an underlying bond of unease mingled with mutual respect that is tangible even when they’re not onscreen together. Director Meghna Gulzar uses this tension to further the intrigue around the interpersonal drama, thrilling us with explosive emotions rather than gun-toting action.

Shankar-Ehsaan-Loy’s music lends credibility to the 70’s backdrop. The songs evoke patriotism without tipping over into nationalism, primarily enhanced by Gulzar’s lyrics. The production design by Subrata Chakraborty and Amit Ray along with Maxima Basu Golani’s costume design further solidify the film’s authenticity, although a few cinematic liberties in the screenplay might take you out of it at specific points. Alia Bhatt’s stellar performance keeps you invested in ‘Raazi’. Her transition from the gullible girl to a determined woman is subtle. Alia keeps Sehmat’s true alliance hidden just under the surface from her new family, but fortunately, in full view of the audience.

Amidst all the compelling performances, this is Alia’s film as she continues to push her boundaries as an actor while challenging our expectations of her. ‘Raazi’ defies the spy genre’s traditional expectations of full-blown action sequences. Instead, Meghna Gulzar’s steady hand gradually ramps up the tension throughout, leading to an explosive final act in this strong dramatic thriller. It also leaves you questioning the repercussions of war on the human psyche.